The Chartable Blog
How to break into the Top Ten 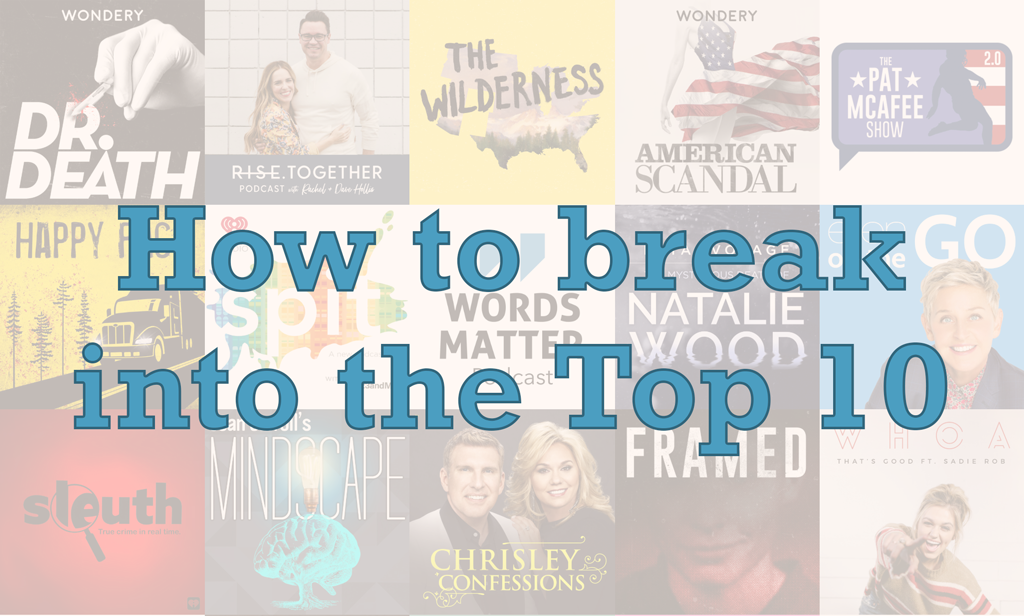 Love 'em or hate 'em, the Apple Podcasts charts are the closest thing to the Billboard Top 100 in the podcast world.

That's because most people listen using Apple Podcasts. Libsyn, one of the top hosting providers by market share, recently reported that Apple gets about 63% of all podcast downloads. For comparison, Spotify, the nearest competitor barely has a tenth of the listeners (6.2%).

In other words, getting on the Apple Podcasts charts is a Big Deal.

And while Apple doesn't disclose many details on how the charts work, we do know that they are broken down by category and country, and that the most competitive chart of all is the one you see when you open the Apple Podcasts app—the "All Podcasts" chart.

Getting on this particular chart is a Really Big Deal. So, what does it take to break through? Just how hard is it to get to the Top Ten?

To a casual observer the charts can seem somewhat static—for  example, The Joe Rogan Experience hasn't left the top ten since we started tracking chart positions in June. But, as unchanging as they seem, new podcasts do occasionally break into the Top Ten.

We took a look at podcasts which launched since July 1, 2018 and found that just twenty out of 30,000 new shows reached the Top Ten in the U.S.

How did these podcasts do so well? All are well-produced and very listenable but, with few exceptions, it takes a little elbow grease to get on the charts.

Let's start with the most common situation podcasters find themselves in. You've launched your podcast and hit a wall, where do you go from here?

Sean Carroll is a well known physicist—as a former physics Ph.D. student who used a textbook of Carroll's in grad school, I was particularly pleased to see his podcast on this list.  His podcast doesn't focus on science—it's a conversational show with some of the world's most talented artists, scientists and thinkers, not unlike The Joe Rogan Experience.

The podcast started in early July, and experienced some growth -- but never made it to the top charts.  It had hit a bit of a wall.  Then, after eight published episodes, it climbed the charts to #4. What happened?

It turns out that Carroll did a guest spot on, perhaps unsurprisingly, The Joe Rogan Experience on July 31st. Just one day later, his podcast started charting on the All Podcasts chart, and within a week it broke into the Top Ten.  By appearing on an insanely popular podcast with similar style and content to his own, Carroll was able to accelerate his growth and hit the charts.

But what if you don't have any inroads into the podcasting community yet? You're not necessarily out of luck, at least not if you already have an audience on other channels.

Dan Rather has a long and storied past as a news anchor. He's had a resurgence in recent years as a political commentator, building a massive social media presence along the way. Rather's recent foray into podcasting was well-received, with Blinking Red vaulting to the top ten within a week of launching.

Rather came from outside of the podcasting community, but leveraged his massive Facebook following to get subscribers by posting an announcement plugging his new podcast:

Some of his 2 million followers subscribed to his podcast, vaulting it into the top ten a few hours later.

Dan Rather and Sean Carroll show that if you have an existing online audience, or you guest on another show, you can crack the Top Ten. But how do the big guys do it?

The charts are filled with shows from the same big names—NPR, Wondery, and Gimlet always seem to be in the Top Ten. Are they simply that good at producing podcasts that go viral?  An inside look reveals a much more sophisticated approach.

It's no exaggeration to call Wondery a hit-maker.  Between Dirty John, Sword and Scale and, now, Dr. Death, if you're a podcast listener you've probably at least checked out one of their productions.  They also have a tendency to own the charts; at the time of writing, Wondery was responsible for three of the top ten podcasts.  How do they do it?

We can see some of the method behind the magic on the rise of Dr. Death. Episode 1 was a trailer, launched a few weeks before the real launch of the show. Wondery (like many other networks) does this for many of their new shows.  A full week after dropping Episode 1, and before the real launch of the show, Dr. Death appeared on the New and Noteworthy feature section, catapulting it in the chart rankings.

We then see a burst of activity timed with the show launch—along with appearing in featured banners in the Apple Podcasts app, Dr. Death was promoted in thirteen other podcasts (that we know of) via a drop-in episode—an entire episode dedicated to the promotion of Dr. Death dropped into another podcast's feed.

Shortly thereafter, Dr. Death reached number one, and it hasn't strayed far from there since.

Each of these podcasts broke into the top ten using very different methods.

Sean Carroll's Mindscape demonstrates the power of doing a guest spot-appearing on The Joe Rogan Experience was enough to boost Mindscape to the top.

Dan Rather, a newcomer to the podcasting world, was able to leverage his existing audience on another channel, Facebook, to bootstrap his podcasting presence.

Wondery, the most sophisticated of the bunch, executed against a coordinated marketing playbook. Landing a New & Noteworthy spot shows the power of having a relationship with the Apple Editorial staff. A cross-promo onslaught on thirteen different podcasts, timed with the launch of the first episode, was enough to get Dr. Death the coveted top slot on the charts.

While getting on the charts can seem like an impossible task, particularly with reports of podcasters gaming the charts, these podcasts shine a light on three different marketing techniques which produce results.

For more posts like this, subscribe to our newsletter using the form below or by visiting https://chartable.com/blog. And if you're a podcaster, be sure to sign up for Chartable's podcast analytics.

Have any questions about podcasts you'd like answered? Just reach out via email at [email protected] or on Twitter @ChartableDotCom; or check out Chartable's API and Data Concierge service. 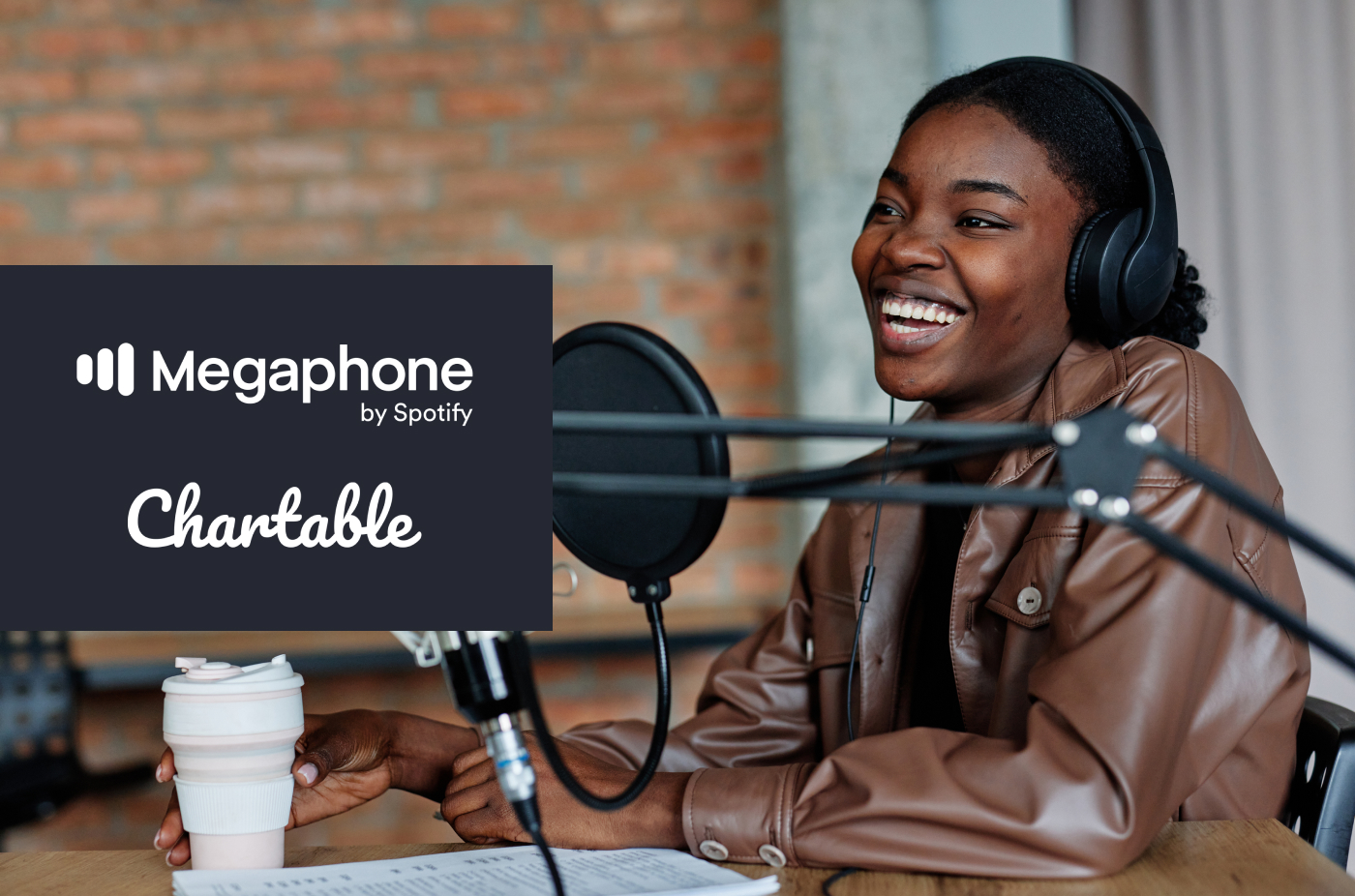